History of the Cueca

1. Introduce the cueca style of music by reviewing the History of the Cueca (pdf) handout.

2. Listen to the listening examples above.

3. Lead students through the technics below using their guitars.

4. Students perform the basic strumming pattern below, accenting beats (2,3) in ¾ time signature. This pattern can be played using an open G major chord.

5. Students perform strumming pattern below, now accenting beats (1, 2, AND, 3) in ¾ time signature. This pattern can be played using an open G major chord.

6. Students perform strumming pattern with an alternating 4 over 3 rhythm (creating a sensation of delaying the beat/pulse). This rhythmic characteristic is called the hemiola, which shifts between triple and duple meter. 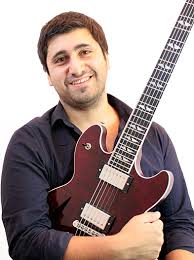 Guitar professor at the Projazz Professional Institute in Instrumental Interpretation, Gabriel recieved a degree in Popular Music Creation at the University of the Americas.

Gabriel learned specialized jazz and fusion styles from masters of the national scene, such as Jorge Vidal, Moncho Romero, Miguel Ángel Pérez among others.

Between the years 2008-2009 he completed a postgraduate degree at the Conservatori del Liceu in Barcelona Spain, where he perfected himself in "Jazz and Modern Music" with musicians from Europe, such as Jordi Bonell, Pedro Javier González, Iñaki Sandoval and Román Gottwald.

Since 2006 he has been working on a project associated with jazz manouche with the Gypsy Trio group, as well as his participation in the projects "Homenaje a Django Reinhardt" and "Gypsy Trio Gira 2011". He currently works as a teacher in Jazz Guitar at the Projazz Professional Institute, at the Maule Regional Theater and at the Jazz Club Academy in Talca, in addition to composing arrangements for the TRM Classical Orchestra in the works of Jesus Christ Superstar and The Novice Rebel.